Review of Wrathbone by Jason Parent 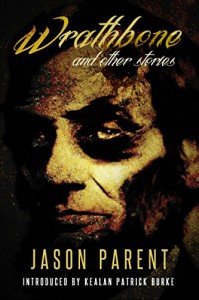 I just finished reading the last story in this collection and I am still having trouble finding words to describe just how much I am in awe of Wrathbone, the story that the collection is named after. I loved every single story in this book, but Wrathbone was by far my favorite. Jason Parent is an author that I have always liked but who I am ashamed to admit I have not read too much from--that is going to change.

Wrathbone: Beautiful, haunting, horrifying...1865. Abraham Lincoln was murdered. Is there a demon that Major Henry Rathbone is unable to stop, or is his haunting a reflection of his madness? Is a lifetime of torment enough or only a taste of what's to come? The writing alone would have had me but Parent has crafted a story to match and both are soul-achingly brilliant.

The Only Good Lawyer: An oxymoron? The epitome of lawyerly loathing, Bradley Walsh will stop at nothing to win a case. Without a bunch of pesky 'morals' getting in his way, there is nothing to lose, right?

Dorian's Mirror: Dorian loves nothing more than Dorian. Dorian's entire world centers around his looks. Putting most teenage girls to shame, Dorian himself is shameless and...flawless? Perhaps not... A quite satisfying spin on an old favorite.

Revenge is a Dish: Maurice gets to travel the world doing what he loves best, working as a chef and exercising his job 'perks'--at least until his boss finds out about his wife's private cooking lessons... cast out and with plenty of time to stew, Maurice plans his revenge and revenge isn't always sweet, sometimes it's salty...

An amazing collection, Wrathbone is one that you don't want to miss. Jason has accomplished in one story collection, one story in particular, what many authors will never do in their lifetime and as impressed as I am, I can't wait to see what else he has in store for us. I am in love with this book and will be paying a lot closer attention to Mr. Parent in the future.