Review of Stranded by Bracken MacLeod 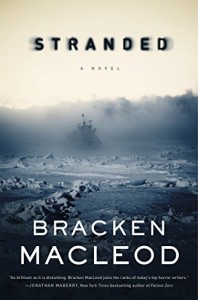 Stranded is the second book I've read by Bracken MacLeod, although the first one hasn't been published yet, it was enough to make me realize that I didn't just want to read Stranded, I needed to. I will also need to read anything that he writes/publishes in the future. Stranded was definitely worth all of the hype and I happily have a signed copy on my bookshelf from when I met Bracken for the second time in person.

I'm sure by now everyone has told you the plot. I wouldn't be rehashing it, even if I wasn't a bit late in posting my review. What I will tell you is that as a woman who is not real current on my sailor jargon, the book started a bit slow for me. This is entirely why it has taken me so long to write this, because I don't know how else to say it. I wasn't sure how to tell you that I thought it started a bit slow and that I don't think it detracted from the book, whatsoever. That said, by 40% I could not put this book down and the rest went fast, too fast. At first I was a little bummed at the end; I wanted more. But the more I have talked about it and the more I have thought about it (which has been a lot), it's either entirely fitting or a great opening for a sequel. (hint, hint)

So how do you write a review that sounds like you don't really like the beginning or the end? Like this. You say that Stranded is one of the best books you have read this year. That Bracken MacLeod is a literary force to be reckoned with. And you say that you maybe could have loved this book a bit more but it was pretty damn good anyways.

I received an e-arc of this from NetGalley in exchange for an honest review.